CD “Blue” (2007), eight songs with lyrics in German, completed by six instrumental oeuvres. Live-Premiere of “Elegie for D. and B.” (Track 14) in an arrangement for symphonic brass orchester in Wuerzburg/Germany, November 2009. 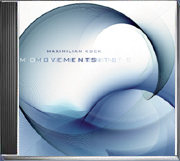 CD “Movements” (2004), a variety of twelve profound songs, including ballads and dance tracks.

CD “Lips under water” (2002), a coproduction with the singer Sibylle Kratzert. Sophisticated Pop-Songs in a extraordinary arrangement.

Theme by Anders Noren — Up ↑